As of writing this, the Seattle Mariners are 47 – 31 on the season. This gives them the fourth best winning percentage in baseball. Not too shabby. The Mariners seem to have been born again in the month of June, quickly climbing past the Angels in the standings, and at one point even taking first place from the juggernaut Astros. All of a sudden, fans everywhere are asking the famous mid-season question: are the Mariners contenders or pretenders?

By June 18th, before embarking on an East Coast road trip, the Mariners were 12 – 4 in the month of June. However, after playing a series at Yankee Stadium, and then one at Fenway Park, they are now 13 – 9 in June. I’ll let you do the math to see how their road trip is going…

Their season as a whole doesn’t look much better, with an average margin of victory of 2.49 runs in their 47 wins. The Mariners simply don’t seem to have the run-scoring power to keep winning games consistently. One-run wins are the proverbial sign of a team with a lot of luck. Eventually, that luck will run out.

Although they have the 4th best record in the MLB, they rank 13th in run differential with only 15 more runs scored than runs allowed. The plot below compares every team’s run differential with their winning percentage. The black diagonal line represents a linear regression of the data to show the overall trend: 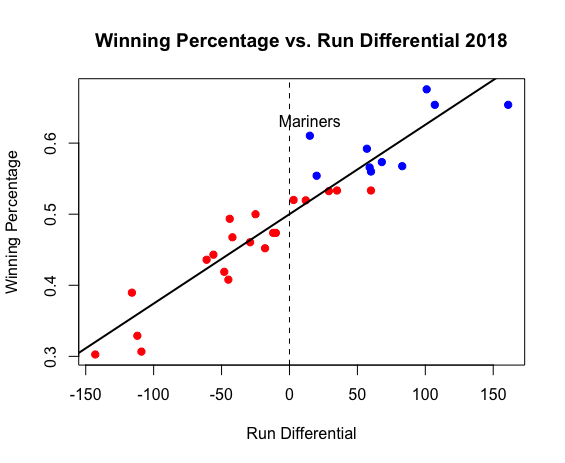 The teams in blue represent who would make the playoffs if the season ended today. The Mariners have the lowest run differential of any of those teams. The fact that they are so far above what the linear model predicts shows that their current winning percentage is unsustainable if their run differential remains this low. In other words, they are over-performing. In fact, they are farther away from the trend (or they have the biggest residual if you want to be fancy) than any other team in baseball by a fair margin.

Another interesting consequence seen from the linear model is that the Astros are severely under-performing. Their residual ranks 4th among all MLB teams, but in the opposite direction of the Mariners. They have the highest run differential in baseball at +161 runs, 54 runs higher than the second place Red Sox, and yet their record is identical to the Red Sox (.658). If they fit the linear model exactly, a +161 run differential would equate to a .702 winning percentage. The trend would tell us that, eventually, the Mariners will fade, while the Astros still have a lot of winning potential left in the tank.

Okay obviously run differential doesn’t tell the whole story about a team. I mean after all, if a team won every game 1 – 0, they would have an incredible +162 run differential, but wouldn’t be considered a “run-scoring machine” by any stretch. In general, run differential does a decent job as a predictor of success, but even on the chart above we can see that there are three teams (the Angles, Nationals, and Dodgers) with higher run differentials than the Mariners that wouldn’t make the playoffs if the season ended today.

This demonstrates the deeper problem the Mariners face. The fact of the matter is that two of the best teams in baseball (the Red Sox and Yankees) are in the same division, and the top three teams in baseball (add the Astros to the list) are all in the AL. This means that either the Red Sox or the Yankees are going to be a wild card team, barring a catastrophic collapse. The Mariners (and all the other AL teams) are essentially left with only one wild card spot to compete for.

So, let’s put all of our run differential talk aside, and say that somehow the Mariners keep up their winning percentage, despite not scoring runs. This leaves them with two options to make it to a divisional series: edge the historically good Astros out of first place, or play a one-game wild card against either the Yankees or the Red Sox, who will probably both be 100+ win teams at that point. We’re talking a game where the fate of the Mariners’ season lies in the hands of James Paxton or Felix Hernandez pitching to one of the best lineups in baseball, and they’ll be throwing against Chris Sale or Luis Severino!

Therein lies the strangeness of this season. Meanwhile, the Indians will likely be able to stroll into the first round of the playoffs with maybe 90 wins. But the baseball season is long . . . like really long. It’s so long that, by the end of the season, you can be pretty confident that the performance of a team to that point is a satisfactory indication of how good the team is. It’s hard to fluke 162 games.

In other words, it may be too early to say anything about any team. But where’s the fun in that? Will the Astros’ winning percentage catch up to their run differential? Will the Red Sox or Yankees fall prey to a wild card game despite winning 105 games? Are the Mariners truly just a paper tiger? Or am I just really far off? Only time will tell.

As a wise person once said, “It ain’t over till the fat lady sings.”

4 thoughts on “Are the Mariners for Real?”